During his time in Boston, Hutchinson and his family were often the victims of mob violence. On August 15 1765 an unruly crowd descended upon his house after a rumor surfaced that he supported the Stamp Act. When Hutchinson refused to accede to the demand that he come out and explain his position, the mob broke several windows and then dispersed.

Two weeks later, on August 28, 1765, an even larger mob returned to the loyalist’s residence. Fortunately, Hutchinson managed to evacuate his family to safety. Then, as he later described it, “the hellish crew fell upon my house with the rage of divels and in a moment with axes split down the door and entered. My son heard them cry ‘damn him he is upstairs we’ll have him.’ Some ran immediately as high as the top of the house, others filled the rooms below and cellars and others remained without the house to be employed there. I was obliged to retire thro yards and gardens to a house more remote where I remained until 4 o’clock by which time one of the best finished houses in the Province had nothing remaining but the bare walls and floors.”

After General Thomas Gage assumed political and military command of the colony in 1774, Hutchinson returned to England.

Almost two years after his departure from Massachusetts, Americans drafted the Declaration of Independence.  Hutchinson publicly dismissed the document as a “list of imaginary grievances.” He quickly drafted a rebuttal, submitted it to royal authorities and had it published anonymously in English newspapers. 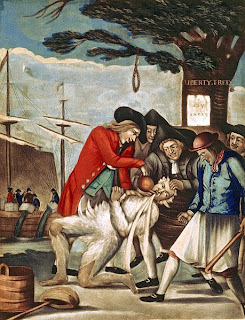 Initially, the former governor noted that “Their designs of Independence began soon after the reduction of Canada, relying upon the future cession of it by treaty. They could have no other pretense to a claim of independence, and they made no other at first, than what they called the natural rights of mankind to choose their own forms of Government and change them when they please.”

With the memories of the Boston mob attacks against him likely still fresh in his mind, Hutchinson was quick to point out that it was Massachusetts Bay Colony that was the driving force behind the move towards independence. “We shall find … that Massachusetts Bay is more concerned in this Declaration than any other Colony … Your Lordship must remember the riotous,violent opposition to Government in the Town of Boston, which alarmed the whole Kingdom in the year 1768. Four Regiments of the King’s forces were ordered to that Town to be aiding to the Civil Magistrate in restoring and preserving peace and order. The House of Representatives, which was then sitting in the Town, remonstrated to the Governor against posting Troops there as being an invasion of their rights . . . How ridiculous then do those men make themselves, who offer it to the world as a ground to justify rebellion?”

In regard to the American claim that England had cut the colonies off from trade via the “Intolerable Acts”, Hutchinson replied “this could not be a cause of Revolt. The Colonies had revolted from the Supreme Authority to which by their constitutions they were subject before the Act passed. A Congress had assumed an authority over the whole, and had rebelliously prohibited all commerce with the rest of the Empire. This act, therefore, will be considered by the candid world as a proof of the reluctance in government against what is dernier resort in every state, and as a milder measure to bring the Colonies to a re-union with the rest of the Empire.”

Similarly, in response to the Declaration’s criticism of imposing taxes without American consent, Hutchinson noted “How often has your Lordship heard it said that the Americans are willing to submit to the authority of Parliament in all cases except that of taxes? Here we have a declaration made to the world of the causes which have impelled separation. . . And I know, my Lord, that these men, in the early days of their opposition to Parliament, have acknowledged that they pitched upon this subject of taxes because it was most alarming to the people, every man perceiving immediately that he is personally affected by it.” 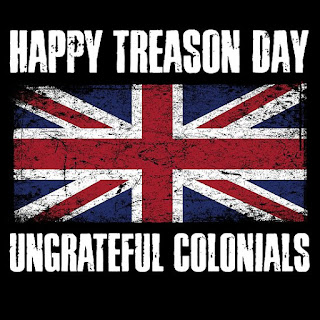 In arguing for separation, the subscribers to the Declaration asserted that His Majesty’s government had committed a wide array of atrocities, including waging war against loyal subjects, kidnapping sailors on the high seas, burning towns and “[destroying] the lives of our people.” These specific claims troubled Hutchinson and led him to assert that the rebelling colonies were solely responsible for their own misery. “These, my Lord, would be weighty charges from a loyal and dutiful people against an unprovoked Sovereign. They are more than the people of England pretended to bring against King James the Second in order to justify the Revolution. Never was there an instance of more consummate effrontery. The Acts of a justly incensed Sovereign for suppressing a most unnatural, unprovoked Rebellion are here assigned as the causes of this Rebellion. It is immaterial whether they are true or false. They are all short of the penalty of the laws which had been violated. Before the date of any one of them, the Colonists had as effectually renounced their allegiance by their deeds as they have since done by their words. They had displaced the civil and military officers appointed by the King’s authority and set up others in their stead. They had new modeled their civil governments and appointed a general government, independent of the King, over the whole. They had taken up arms, and made a public declaration of their resolution to defend themselves against the forces employed to support his legal authority over them.”

In the conclusion of the rebuttal, the former Massachusetts leader stressed that the Declaration was nothing more than a feeble attempt to justify rebellion and there were many men who supported the crown but feared to speak out due to the violent tendencies of American mobs. “They have, my Lord, in their late address to the people of Great Britain, fully avowed these principles of Independence by declaring they will pay no obedience to the laws of the Supreme Legislature … and have endeavored to persuade such as they called their British Brethren to justify the Rebellion begun in America, and from thence they expected a general convulsion in the Kingdom . . .The people have not observed the fallacy in reasoning from the whole to part, nor the absurdity of making the governed to be governors. From a disposition to receive willingly complaints against Rulers, facts misrepresented have passed without examining. Discerning men have concealed their sentiments, because under the present free government in America, no man may, by writing or speaking, contradict any part of this Declaration without being deemed an enemy to his country, and exposed to the rage and fury of the populace.”
Posted by Alexander R. Cain at 10:22 AM