A couple of years ago, the Nerds posted a blog article detailing the aftermath of the April 19th fight in Lexington. In addition to suffering the highest casualty rate of the American forces on that day, Lexington also suffered extensive property damage. Several homes were burned or destroyed and others were looted.

As Andover minuteman Thomas Boynton recalled, "After we came into Concord road we saw houses burning and others plundered and dead bodies of the enemy lying by the way, others taken prisoners."


Another Andover soldier, James Stevens, also recounted, "We went in to Lecentown. We went to the metinghous & there we come to the distraction of the Reegerlers thay cild eight of our men & shot a Canon Ball throug the metin hous. we went a long through Lecintown & we saw severel regerlers ded on the rod & som of our men & three or fore houses was Burnt & som hoses & hogs was cild thay plaindered in every hous thay could git in to thay stove in windows & broke in tops of desks."

However, what about the extent of damage in the neighboring town of Menotomy? The late afternoon engagement was a brutal, hand to hand struggle that resulted in an American casualty rate that was higher than the Battles of Lexington and Concord combined.

According to the Reverend William Gordon, the level of property damage in Lexington and Menotomy was extensive. "You would have been shocked at the destruction which has been made by the Regulars, as they are miscalled, had you been present with me to have beheld it. Many houses were plundered of every thing valuable that could be taken away, and what could not be carried off was destroyed; looking-glasses, pots, pans, etc. were broke all to pieces; doors when not fastened, sashes and windows wantonly damaged and destroyed. The people say that the soldiers are worse than the Indians."

The Reverend David McClure of Boston visited Menotomy on April 20, 1775. According to his observations, the horrors of war were everywhere. “Dreadful were the vestiges of war on the road. I saw several dead bodies, principally British, on & near the road. They were all naked, having been stripped, principally, by their own soldiers. They lay on their faces. Several were killed who stopped to plunder & were suddenly surprised by our people pressing upon their rear.” The minister also noted how many of the Menotomy “houses on the road of the march of the British, were all perforated with balls, & the windows broken. Horses, cattle & swine lay dead around. Such were the dreadful trophies of war.”

It was likely that many of the homes along the path of the engagement were littered with dead militiamen and British regulars. As Lieutenant John Barker of the 4th Regiment of Foot later reported, “All that we found in the houses were put to death.” According to Jason Russell’s wife, the blood was “almost ankle deep” in one of the rooms and her house was “riddled with bullets.” 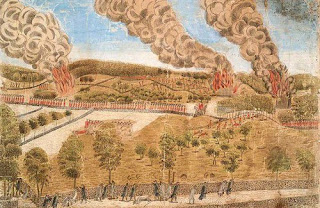 The same day that the Reverend McClure was in the town, Hannah Winthrop also traveled through Menotomy to return to her home in Cambridge. According to Winthrop, “But what added greatly to the horror of the scene was our passing through the bloody field at Menotomy, which was strewed with the mangled bodies. We met one affectionate father with a cart looking for his murdered son and picking up his neighbors who had fallen in battle, in order for their burial.”

Danvers suffered the greatest loss, with seven men killed, two wounded and one man captured. Only John Parker’s Lexington Company had a higher casualty rate for that day. In the aftermath of the engagement, the Danvers dead were placed on an ox-sled and sent home to their town. According to an early 19th century account, Joanna Mansfield of Lynn recalled seeing the dead militiamen as they passed through her town. All of them, she recalled, were wearing heavy grey stockings.

As with Lexington, many of the homes in Menotomy fell victim to theft and vandalism as well. Property claims submitted to the Massachusetts Provincial Congress included reports of stolen clocks, alcohol, clothing, jewelry and furniture.Of course, not all of the thieves were successful in their ventures. The Reverend McClure observed, “Several were killed who stopped to plunder, & were suddenly surprised by our people pressing upon their rear.”


Interestingly, a witness to the aftermath noted that plundering and theft were not limited to British soldiers. The Reverend McClure noted that “four fine British horses” were lying dead on the side of the Boston Road and that several Menotomy residents “were taking off their shoes.”

Naturally, at some point in the near future, the Nerds will get off their collective lazy butts and explore what role, if any, Massachusetts provincial forces played on April 19, 1775 regarding the theft and plundering of Middlesex County homes.
Posted by Alexander R. Cain at 9:13 PM