"The Bloody Field at Menotomy" - The Brutality of the Menotomy Fight

It is unfortunate that outside of historical works and research studies, the fight at Menotomy on April 19, 1775 does not receive the attention it deserves. The late afternoon engagement was a brutal, hand to hand struggle that resulted in an American casualty rate that was higher than the Battles of Lexington and Concord combined.

Following Percy’s departure from Lexington around 3:30 in the afternoon, he and his men were repeatedly harassed by enemy fire. “As soon as they saw us begin to retire, they pressed very much upon our rear-guard, which for that reason I relieved every now & then. In this manner we retired for 1 5 miles under an incessant fire all round us.” Lieutenant Frederick MacKenzie also made note of where the provincial attacks were coming from. “Before the Column had advanced a mile on the road, we were fired at from all quarters, but particularly from the houses on the roadside, and the Adjacent Stone walls.”

As the troops advanced, they approached the Town of Menotomy, which had been abandoned by the local populace hours earlier. The town was the perfect location for sniper attacks and ambushes as the village road sloped downwards and was flanked on both sides for over a mile with homes, barns and enclosed pastures. Minute and militia companies recognized the opportunity, poured into the village and took up positions inside the homes and along stone walls. 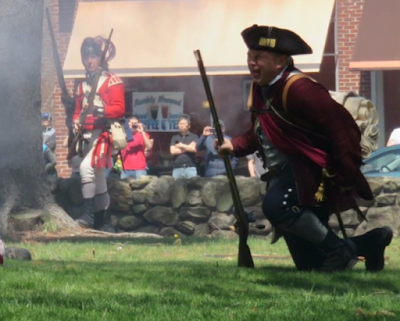 As the regulars continued towards the town, colonists sheltered in the homes opened fire. Recognizing the extremely dangerous situation his men were in, Percy ordered the homes cleared. Squads of regulars rushed out from the column and stormed the various structures. The fighting moved from house to house and it was literally to the death. “Soldiers were so enraged at suffering from an unseen Enemy, that they forced open many of the houses from which the fire proceeded.”

Lieutenant John Barker of the 4th Regiment of Foot described how no quarter was given to the enemy. “We were now obliged to force almost every house in the road, for the Rebels had taken possession of them and galled us exceedingly, but they suffer'd for their temerity for all that were found in the houses were put to death.” Another officer recalled that the regulars “put to death all those found in [the houses].”

Many of the flanking parties also had orders to torch the houses they cleared. However, Lieutenant Mackenzie noted the task was virtually impossible. “Those houses would certainly have been burnt had any fire been found in them, or had there been time to kindle any; but only three or four near where we first formed suffered in this way.”

One of the first units to incur the British wrath was Captain Gideon Foster’s Company. The unit had made a forced march from Danvers to Menotomy in just under four hours. Upon arrival, Foster positioned his men along a stone wall flanking a hillside orchard, alongside minutemen and militiamen from Lynn, Needham and Dedham. Some of Foster’s company took cover behind another wall across the roadway at Jason Russell’s house. As Percy’s column approached, the Danvers men apparently did not see a flanking party from the 4th Foot come up behind them. Now trapped between two bodies of enemy troops, the men from Danvers, Lynn and Needham made a mad dash for the Russell House. Several militiamen were cut down as they tried to escape. One of those was twenty-one year old Perely Putnam of Danvers.

The British soldiers pursued the provincials into the Russell House and found two militiamen on the first floor. The first tried to escape and “leaped through the end window, carrying sash and all with him.” Regulars waiting in the yard shot and killed him. The second followed and was wounded in the leg. He somehow managed to escape. Later accounts purport his hat, coat and waistcoat had no less than thirty-two bullet holes in them.

British regulars quickly stormed the second floor, cellar and attic. Fighting was close and hand to hand. Many of the regulars relied upon the bayonet. Captain Foster would later assert that three or four of his men surrendered only to be “butchered with savage barbarity.” Nineteen year old minuteman Dennis Wallis attempted to surrender but fled when he realized he was about to be killed. He was shot several times yet somehow managed to survive.

By the time the fighting in and around the Russell House had concluded, eleven men were dead. Danvers suffered the greatest loss, with seven men killed, two wounded and one man captured. Only John Parker’s Lexington Company had a higher casualty rate for that day.

Fighting was equally brutal at Captain Samuel Whittemore’s home. Both primary and secondary sources document that Whittemore was brutally beaten and bayoneted multiple times by enraged soldiers as he defended his residence. 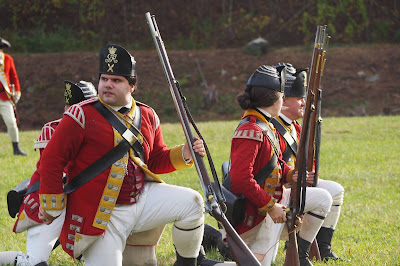 Behind the flanking parties came the plunderers. Stolen property claims submitted to the Massachusetts Provincial Congress by Menotomy residents included reports of stolen clocks, alcohol, clothing, jewelry and furniture. Of course, not all of the thieves were successful in their ventures. When he visited Menotomy on April 20th, the Reverend David McClure observed “Several were killed who stopped to plunder, & were suddenly surprised by our people pressing upon their rear.”

Period accounts suggest the house to house brawl left the homes and road littered with dead soldiers. “I saw several dead bodies, principally british, on & near the road. They were all naked, having been stripped, principally, by their own soldiers. They lay on their faces.” Andover militiaman Thomas Boynton described the damage along the road as his minute company advanced towards Cambridge. “We saw houses burning and others plundered and dead bodies of the enemy lying by the way, others taken prisoners.”

In May, 1775, Hannah Fayerweather Winthrop wrote to her friend Mercy Otis Warren and described the carnage she observed in Menotomy. “What added greatly to the horror of the Scene was our passing thro the Bloody field at Menotomy which was strewd with the mangled Bodies, we met one Affectionate Father with a Cart looking for his murderd Son & picking up his Neighbours who had fallen in Battle, in order for their Burial.”
Posted by Alexander R. Cain at 9:50 AM