Prior to the start of the 225th Anniversary celebrations of the American Revolution, a large number of New England reenactors turned to the wearing of “frocks”, instead of jackets and coats as their primary outer clothing garments. It appears the dual purpose of adopting frocks was to permit town organizations (i.e. local “minute man companies”) to quickly comply with the existing authenticity standards of the time, as well as provide a visual presentation of uniformity when needed.

This practice continued well past the 225th Anniversary reenactment of the Siege of Yorktown and only ceased when historians and researchers began to question whether or not militia and minutemen would have worn frocks during the various military engagements of 1775. Around 2010, Minute Man National Park and many other historical sites revised their authenticity standards and started to phase out the wearing of frocks by living history volunteers.

The purpose of this post is to once again examine the appropriateness of wearing frocks in battle reenactments and living history demonstrations that focus on the events of April 19, 1775 in light of current
research. 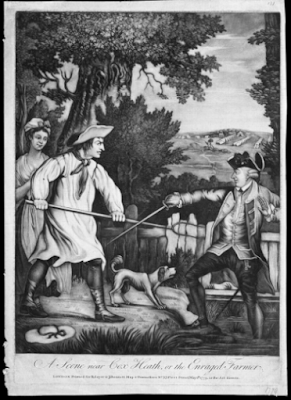 A frock (often erroneously called a “smock”) was an oversized shirt made out of heavy linen, wool or osnaburg that was worn by laborers, farmers, sailors and soldiers to protect their clothing from dust, tears, rips and bad weather while in the field or at work.
Frocks were quite common in Europe. In the 1770 mezzotint entitled A Scene Near Cox Heath, or The Enraged Farmer a pitchfork-wielding farmer is depicted in a knee-length frock, flop hat, and farmer’s boots. However, sources do indicate that frocks were also in existence in New England on the eve of the American Revolution. To quote John Adams, “a frock and trowsers, spade and hoe, will do for my remaining days.” Ebenezer Blancher had on “frock and trowsers, over a dark homespun jacket and breeches” when he fled from his employer in 1770. Finally, period paintings also seem to support the existence of frocks in 18th century England and her colonies. In Copley’s Watson and the Shark, at least one of the sailors depicted is wearing a linen frock.
A frock should not be confused with a hunting shirt. According to John Trumball, “you express apprehension that the rifle dress of General Morgan may be mistaken for a waggoner’s frock, which he, perhaps wore when on expedition with General Braddock; there is no more resemblance between the two dresses, than between a cloak and a coat; the waggoner’s frock was intended as the present cartman’s to cover and protect their other clothes and is merely a long coarse shirt reaching below the knee . . . the dress of the riflemen . . . was an elegant loose dress . . . with fringes in various locations.”

Given the documentation that frocks did exist in 18th century Massachusetts, the next logical question is whether frocks were considered fashionable clothing items to be worn at town meetings, religious gatherings and political protests or a piece of equipment limited in use to the field, along the docks, onboard a vessel or in a shop or mill. A review of probate inventories, period political cartoons and run away descriptions suggest that on the eve of the American Revolution frocks were little more than a coverall and were rarely worn outside of the workplace.

Probate records comprise all materials related to a deceased’s estate. Documents often found in probate records include wills, administration accounts and estate inventories. Of these documents, estate inventories are often the most significant as it lists a person’s possessions at death and their rated or fair market value. Interestingly, estate inventories from 18th Century Middlesex, Essex and Norfolk Counties reveal extensive information about male clothing and their worldly possessions and include a smattering of references to frocks. For example, an inventory of the estates of Jonas Parker of Lexington and Samuel McCall of Deerfield both list frocks as part of the deceased's' belongings. 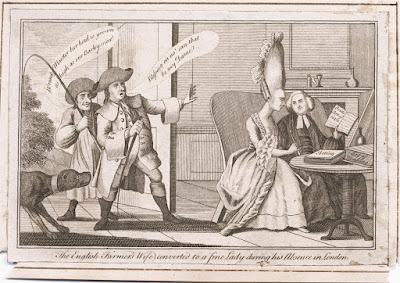 However, a review of runaway descriptions from 1745 to 1775 reveals ample evidence of frocks being worn by yeoman and laborers over other clothing for the purpose of keeping it clean. A casual search of runaway advertisements from Boston newspapers from those selected periods resulted in 34 results. A similar search of Newburyport area newspapers from 1773 to 1776 revealed six references to “frock”. For example, a 1746 advertisement in the Boston Gazette described “John Craister of Boston … had on when he went away a Frock over a cloth jacket and a red pair of breeches.” In 1770, a runaway advertisement in the same newspaper described a runaway laborer with a “brown fustian Frock, cloth colour’d waistcoat and leather breeches.” In October 1774, the Essex Journal and Merrimack Packet described a wanted loyalist, known only as “M. Cadegan”, as having fled Cambridge wearing a “waggoner’s frock”.

Finally, period paintings and cartoons support the theory that frocks were unlikely to be worn beyond the field or shop. For example, Revere’s Bloody Massacre depicts the Boston populace clad in jackets and frock coats. A 1773 print of a tarring and feathering of a government official in Boston shows a Boston mob clad in jackets and sailors coats but absent are frocks. The cartoon Political Electricity depicts the Boston working-class clad only in jackets. The 1774 print The Bostonians Paying the Excise Man or Tarring and Feathering shows five Bostonians assaulting a customs commissioner. The Bostonians are all wearing frock coats and sailor’s jackets. Even the simplistic drawing of the Battle of Lexington by Doolittle depicts the Lexington militiamen clad only in brown and blue coats. Not a single militiaman is wearing frocks.

So, with that in mind, were frocks worn by Massachusetts militia on April 19, 1775? It was highly unlikely that frocks were worn by militia men from Central Middlesex County, including Lexington and Concord, due to the fact they were alarmed well before sunrise on April 19, 1775 and had time to change or dress in better clothing. In fact, there are multiple accounts from those towns of provincial soldiers wearing their best clothing to go out to meet the regulars.
Of course, militia and minute companies located in Northern and Eastern Essex, Northwestern Middlesex, Worcester, Norfolk and Barnstable Counties all received the Lexington alarm much later - between 5 AM and Noon. One may argue that these militiamen were already working in the fields or shops when news of the British expedition arrived. The common assertion is many of these farmers and laborers immediately sprung into action, abandoned their plows and stores and raced to an appointed assembly site dressed in their work clothes. While such a scenario is plausible, there is also evidence that minute and militia companies from Andover, Haverhill, Amesbury, Newburyport, Ipswich, and Plymouth mobilized one to three hours after being alarmed. As a result, these men also had time to change into better clothing before marching to war.
More importantly, there are no period accounts describing provincials as fielding with smocks nor any petitions submitted to the Massachusetts Provincial Congress or the legislature by militiamen for lost or destroyed frocks on April 19th.

As an aside, even after the Battles of Lexington and Concord, there is little evidence that the Massachusetts Grand Army adopted frocks as part of a uniform appearance during the Siege of Boston. Although there is a single early 19th-century account of Connecticut troops donning blue frocks before marching to join the Battle of Bunker Hill, there are no known primary descriptions of New England troops adopting a uniform appearance via the wearing of frocks in 1775.
In the Summer of 1775, the Massachusetts Provincial Congress met to discuss the issuance of uniforms for the provincial soldiers surrounding Boston. According to Henry Cooke, Congress chose to clothe these troops in “bounty coats”. These coats were modeled after common laborer jackets and from a “deliberate political standpoint represented the citizen soldier and America’s self-sufficiency in the face of England’s colonial policies.” Interestingly, the Massachusetts Provincial Congress never considered clothing its soldiers uniformly in frocks.
Given the above, the Nerds believe reenactors portraying militia and minute companies that mobilized on April 19, 1775, should continue to discourage the wearing of frocks from its ranks during battle reenactments or living history events commemorating the commencement of the American Revolution.

Does not mean that frocks should be outright banned or excluded? Of course not. Instead, the Nerds would humbly suggest that this particular garment would be best utilized at living history events demonstrating fieldwork, laboring activities or perhaps maritime activities.

Nerds Note...If you are looking for a period-correct frock, we do recommend AHL Tailor & Naval Clothier. Adam’s site can be found here: https://www.facebook.com/AHLTailorNavalClothier/
Posted by Alexander R. Cain at 6:15 PM