Recently, The Boston Garrison approached the Nerds about writing a brief article about the "Salem Affair", which is considered one of the early acts of resistance of the American Revolution. Our essay appeared earlier this week on the Boston Garrison Facebook Page.

We are republishing our essay it in the event you may have missed it!

On February 26, 1775, there was a confrontation in the port town of Salem, Massachusetts that today is referred to as “The Salem Affair”. Although this event is often glossed over by many historians, the incident nearly triggered the start of the American Revolution and in turn, accelerated Massachusetts’ wartime preparations.

The Salem Affair was the result of General Thomas Gage’s desire to locate and recover four missing pieces of brass cannon. On the eve of the American Revolution, brass cannons were considered “weapons of mass destruction”. They were light, easily maneuverable and deadly. In September 1774, four of these weapons were stolen while under guard and smuggled out of Boston. In mid-February 1775 Gage received intelligence that “twelve pieces of Brass Cannon” were located in the seaport community of Salem. Shortly thereafter, he learned that the “Field pieces [were] in an old store, or Barn, near the landing place at Salem, … [and] are to be removed in a few days.”

The cannons in Salem were actually old iron French pieces that had been purchased in 1774 by Colonel David Mason of Salem. Afterwards, he had Robert Foster, a local blacksmith, mount them to carriages. The guns were then stored in Foster’s shop located along the North River.

The general was unaware of that the pieces were old iron guns and was convinced that the four missing brass cannons were stored in the seaport community. Desperate to recover them, he ordered Lt. Colonel Alexander Leslie and 240 men of His Majesty’s 64th Regiment of Foot to sail from Castle William in Boston Harbor to Marblehead. The strike force would then march four miles to Salem to seize the cannons. 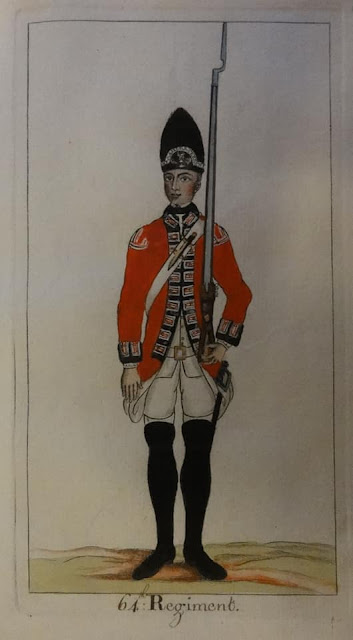 At two o’clock in the afternoon of February 26th, a Royal Navy vessel anchored off the coast of Marblehead. Since it was a Sunday, many of the locals were attending afternoon religious services. The troops landed and commenced a quick march towards Salem.

Of course, the operation was almost immediately detected, and news reached Colonel Mason that “troops were marching into the town … to take possession of his guns”. In turn, Mason raced towards Foster’s blacksmith shop. En route, he stopped at Salem’s North Church to announce, “The regulars are coming after the guns!”. Many of the churchgoers assisted Mason and Foster in either hiding or relocating the cannons. Afterward, they raised a drawbridge over the North River, thereby preventing the regulars from gaining access to Foster’s blacksmith shop.

When Leslie’s strike force arrived, there was a tense standoff between the Salem residents and the troops. The colonel demanded that the drawbridge be lowered. Foster and Mason refused. In response, according to historian J.L. Bell, Leslie contemplated aloud whether he should order his troops to fire into the civilian crowd. Some of his soldiers tried to seize a pair of gondolas moored in the North River but the residents got to the boats first and purposely sunk them. Other regulars got into a shoving match with some of the townsmen, resulting in Joseph Whicher being slightly scratched with the tip of a bayonet.

At the height of the confrontation, Mason loudly announced that alarm riders had been dispatched and Essex militia companies would be converging on the town in mere hours. Violence seemed inevitable. Suddenly, the Reverend Thomas Barnard stepped forward to defuse the situation and negotiate a compromise. Aware that the cannons were long gone, Barnard suggested that the bridge be lowered. Leslie in turn “pledged his honor he would march not above thirty rods beyond it, and then immediately return”. The colonel would not search for the cannons. All parties agreed to the proposal, the 64th marched across the bridge and then marched for Marblehead empty-handed. The troops boarded their transport and sailed back to Boston. 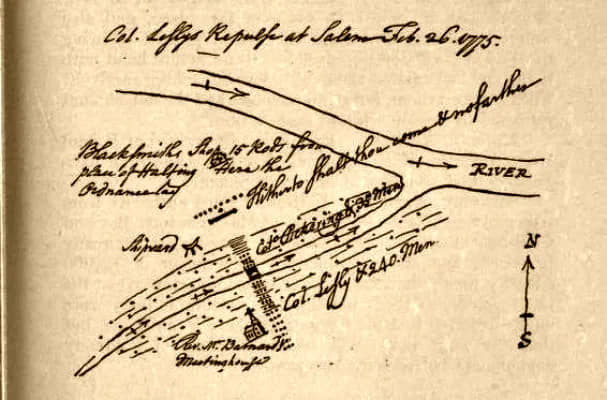 General Gage would later report “The circumstance of the eight field pieces at Salem led us into a mistake, for supposing them to be brass guns brought from Holland, or some of the foreign isles, which report had also given reasons to suspect, a detachment of 400 men under Lieut. Col. Leslie was sent privately off by water to seize them. The places they were said to be concealed in were strictly searched, but no artillery could be found. And we have since discovered, that there had been only some old ship’s guns, which had been carried away from Salem some time ago.”

Of course, one of the more humorous stories that comes out the Salem Affair hails from Newburyport. On the eve of the American Revolution, Newburyport had no less than nine military companies in its community: four militia companies, two minute man companies, two “private” companies composed of the town’s elite, and one private artillery company that apparently was uniformed. In the late afternoon of February 26th, an alarm rider arrived in Newburyport with news of the Salem Affair. The nine military units all mobilized and marched for Salem. It appears the men advanced as far as Rowley when they received word that the confrontation was over. The Newburyport soldiers turned around and stopped at the first tavern they found. While there they raised their glasses to no less than 120 toasts and proceeded to drink the tavern dry. The men then promptly left without paying their tab. For the next two years, the poor tavern keep would write to the Newburyport selectmen asking for the town to reimburse him. At first, the town ignored his please but eventually the selectmen reluctantly agreed to repay the bill.

For more information on the Salem Affair and the four brass cannon, be sure to check out “The Road To Concord: How Four Stolen Cannon Ignited the Revolutionary War” By J.L. Bell