"In Addition to Disarming Them...Their Children Should Be Taken as Hostages.” - The Loyalist Experience in 1775 Albany County

By 1775, the seeds of rebellion had seeped into New York’s Albany County. Although initially slow to respond, many Albany County residents ultimately turned against their Tory neighbors. On May 3, 1775, the Albany Committee of Correspondence voted “ That Mess- Abraham Cuyler and Hendrick Wendell be a Committee to apply to Mr Dirck Ten Broeck for two hundred Stand of small Arms of the Parcel he is Possessed of, and when they are procured to put such of them as require it in proper Hands to be prepared and made fit for immediate Service. From the present state and Turbulance of the County . . . From the information of Col. Johnson respecting the Canadians and on Account of the great uneasiness of the Inhabitants, on these Occasions We conceive it prudent and advisable to have a Strict and Strong Watch well-Armed and under proper Discipline, and the Corporation declining to undertake the same.”

Almost immediately, armed night watches roamed the streets of Albany, the county seat, in an attempt to intimidate those loyal to the King and British government. Organized “committees” disrupted meetings held in Albany’s town hall between the Tory leaning mayor and his aldermen. Local businessmen with questionable loyalties, including the prominent Richard Cartwright, were brutally assaulted and imprisoned. Tories who openly criticized or challenged the rebels’ motives were quickly arrested and sent off to prison. Newspapers and print shops advocating loyalty to the King were immediately suppressed and shut down. 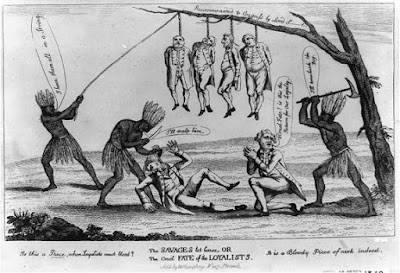 Coordinating the rebel’s efforts were a group of men known locally as the “Tory Committee”. The Tory Committee’s primary charge was to keep in check those loyal to the crown. Of particular interest to the committee was the Scottish population that resided throughout Albany County. The Scottish settlers were known for their fierce loyalty to the Crown. But devotion to the King was not the sole reason for hostility towards the Scots by the Tory Committee and its supporters. Many Scottish settlers were of either Presbyterian or Catholic faiths. Following the aftermath of the French and Indian Wars, the concept of Roman Catholics and Presbyterians openly practicing their religious beliefs deeply concerned their Congregationalist and Anglican neighbors. Worse yet, many Scottish ministers and priests openly welcomed black slaves and local Mohawks into their parishes and churches. This alarmed many local residents, especially those who either owned slaves themselves or lived within striking range of the Mohawk and Oneida tribes. To them, the recruitment of these two classes would most likely lead to either a slave revolt or Indian uprising. As members of the New York Provincial Congress warned early in the American Revolution, “the indulgence and establishment of Popery all along the interior confines of the Protestant Colonies tends not only to obstruct their growth, but to weaken their security.”

Economic competition also motivated the actions of the Tory Committee. As the French and Indian War drew to a close, Scottish sutlers who followed and supplied the Highland regiments established their own businesses throughout Albany County. With a readily accessible customer base and network, many Scottish businessmen easily outpaced their “patriot” counterparts. With the rise in tensions between those loyal to Crown policy and those who were not, the Tory Committee seized upon an opportunity to crush their economic competitors. Merchants such as James and Alexander Robertson were all but helpless as mobs incited by the Tory Committee first shut down their print shop, then their newspaper, the Albany Gazette. Many other merchants were physically jailed merely for suspicion of being a Tory.

As the war progressed, many members of the patriot faction believed those loyal to the Crown were internal foes who needed to be carefully contained. In an effort to limit loyalist military and political influence, early in March of 1776, New York’s Committee of Safety perceived loyalist opposition to be so strong in certain counties, that they “advised that, in addition to disarming them [the Loyalists], their children should be taken as hostages.”

By the Fall of 1776, conditions in Albany County had deteriorated to the point that many Tories started to flee northward towards Canada so as to avoid continued persecution. Those who remained behind were subjected to increased scrutiny and repeated interrogation before committees charged with identifying and incarcerating those loyal to the King. On May 10, 1777, under intense questioning, a suspected Tory denied being a Tory so as to avoid incarceration. Unfortunately, his fate was sealed when refused to renounce his allegiance to the King. “One [man] protested he was no Tory, but was a man for the King”.

As William Bolts accurately predicted, “history abounds with instances of nations driven into madness by the cruelty of oppression; it is the singular situation of us at present that we have been made mad by an impatience of all legal restraint and wanton abuse of power.”
Posted by Alexander R. Cain at 1:03 PM No comments: