Over the past several years the nerds have received multiple inquiries regarding whether or not tin canteens were used by Massachusetts militia and minute companies at the outbreak of the American Revolution. At first, we naturally assumed that these water containers would have been readily available as they were issued to Massachusetts Provincials fighting in the French and Indian War. However, the more we examined the matter, the more we were convinced that tin canteens were most likely not utilized by Massachusetts forces on April 19, 1775.

The first thing we noticed in our research was as early as 1746, tin canteens were referred to as "flasks" and "tin flasks" rather than “canteens”.  Of course, the tin industry was almost non-existent in mid-18th Century New England and as a result, Massachusetts officials were heavily dependent upon England to deliver tin flasks to the colony.

During the French and Indian War, English supply lines were sporadic and occasionally non-existent. Thus, there is a gradual evolution by the Massachusetts legislature to supply only wood canteens or “wood bottles”. At first, colonial officials recommended troops be supplied with tin flasks or “wooden bottles”.  However, by 1758-1759, the Massachusetts legislature had entirely ceased recommending tin flasks and ordered provincial soldiers be supplied with “a wooden bottle made with one hoop ... or a Canteen".

That said, we do want to mention that a limited amount of tin flasks were issued to Massachusetts provincial troops during the French and Indian War. At least 1000 tin flasks (ie canteens) from England were disbursed to Colonel Thomas Doty's Regiment in May 1758. According to the "Account of Warlike Stores deliver'd Col., Thomas Doty's Regiment" the unit received "...1000 flasks, 183 Tin Kettles." It should be noted that this report of equipment issued surfaced in a Boston newspaper after Colonel Doty publicly claimed his regiment never received weapons, canteens, and accoutrements.

So assuming that at least 1000 tin canteens were in the hands of provincials in 1758, the next question is whether they remained in serviceable condition to be of any use in 1775?

During the French and Indian War, the British government was not sending its best arms and equipment to the American colonies. Many provincial soldiers and colonial officials repeatedly complained about the quality of supplies they received. In 1756, Virginia’s Lieutenant Governor Robert Dinwiddie complained about a shipment of arms and equipment that was received and slated to be shared amongst the American colonies, including Massachusetts. According to Dinwiddie, the stands of arms were “in a very rusty condition, and it w’d appear they had been underwater for months.”

The previous year, on September 28, 1755, Governor Shirley and Major General William Pepperrell both received correspondence highlighting the inadequacies of weapons and equipment sent to Massachusetts provincials. “The locks being wore out and the hammers so soft, that notwithstanding repeated repairs they are most unfit for service, particularly Sir William Pepperrell’s Regiment being old Dutch arms. The holes of the pouches and boxes are so small that they cannot receive the Cartridge, nor is there substance of the wood, to widen them sufficiently. The leather scanty and bad likewise.”

Given the above, we suspect tin canteens issued from England were also of poor quality and would not have survived a hard military campaign season, let alone twelve to seventeen years of service on a New England farm before being used on April 19th.

However, to cover all bases, we returned to the Massachusetts legislative records and examined petitions for compensation for property, destroyed or lost at the Battles of Lexington and Concord and the Battle of Bunker Hill. There are NO claim or request for compensation for lost tin flasks or tin canteens. We also examined available returns and orders for Massachusetts minute and militia companies immediately before or after Lexington and Concord. While we have uncovered references to "wooden bottles" we have not found a specific reference to “tin flasks”.

Finally, we examined merchant advertisements from Boston, Salem and Newburyport between 1770 and 1776. Unfortunately, we could not find a single advertisement for tin flasks or tin canteens.

As a result, we’re of the opinion tin canteens were not utilized by Massachusetts militia and minute companies at Lexington and Concord.

Of course, if you know of any available documentation that challenges our theory, please let us know! We’d love to get your thoughts on the issue!
Posted by Alexander R. Cain at 7:53 PM 5 comments:

Admittedly, the Nerds might have had one beer too many during a recent visit to Brewery Silvaticus as we started talking about unusual wedding customs in 18th and early 19th Century New England. Here’s what we found.

In Newburyport and other Massachusetts seaport communities, there was the tame tradition of the bridal party walking in procession through the town following the marriage ceremony. (The bride was commonly referred to as the "walking-out bride".) In other New England communities, an elaborately dressed bride and groom would occupy a prominent seat in the gallery of the meetinghouse on the Sabbath after their wedding. At some point, they would be called upon by the minister to stand up and model every side of their wedding finery. Often the bride would be allowed to select the text of the sermon preached. In 1764, Abigail Smith Adams, with the help of her father, selected the biblical text, "John came neither eating bread nor drinking wine, and ye say he hath a devil." 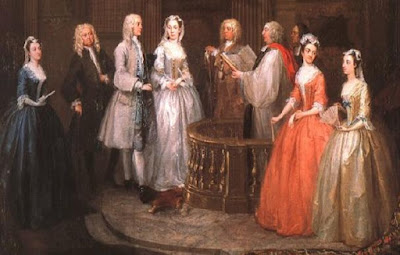 Of course, not all wedding traditions were so mild. In Londonderry, New Hampshire, residents took the celebration of marriage one step further and introduced the British sport of "riding for the kail” or "riding for the ribbon". Period accounts suggest the wedding festivities began when the groom's friends would gather at his home, arm themselves with muskets and march towards the bride’s residence. Along the way, the party would discharge their guns at every house they passed. Eventually, they would meet up with a party of the bride’s male friends. Each group would then choose a champion to "run for the bottle" at the bride's home.

The event typically involved a horse race at breakneck speed through half-cleared roads to the home of the bride. The first to arrive would secure a beribboned bottle of whisky and race back to his companions with the prize.

Following the race, both groups, as well as the bridal party, would then proceed to the wedding venue. As they passed through certain neighborhoods, hidden groups of men would discharge blank cartridges at the party. In other neighborhoods, trees were felled or grapevines stretched across the roadway to delay the bridal festivities.

Upon reaching the wedding venue, the bridegroom and his party of friends entered a room and remained there until the best man escorted the bride to the gathering. The best man and a male bridesmaid would then station themselves behind the bridal couple. Afterwards, the ceremony would start.

And yes - at the end of the ceremony, the beribboned bottle of whiskey was usually consumed.

In other New England towns, a common custom was to kidnap the bride in the midst of the wedding ceremony. Typically, a group of young men who had not been invited to the ceremony would crash the party and drag away the bride. In turn, the groom and his companions would pursue the kidnappers and rescue the bride by providing dinner to the culprits. In the town of Charlestown, Rhode Island, one account describes how a group of young men went to the home of a bride in the middle of the night, pulled her out of bed, and carried her downstairs. When the raiders found the front door locked, they beat it down with an axe and disappeared into the night with her.

A similar custom existed in Connecticut but involved the groom trying to escape from the wedding. According to a 1704 account by Sarah Kemble Knights, “They generally marry very young; the males oftener, as I am told, under twenty than above, they generally make public Weddings, and have a way something Singular (as they say) in some of them, viz., just before joining hands the Bridegroom quits the place, who is soon followed by the Bridesmen, and, as it were, dragged back to duty - being the reverse to the former practice among us to steal Mistress Bride.” 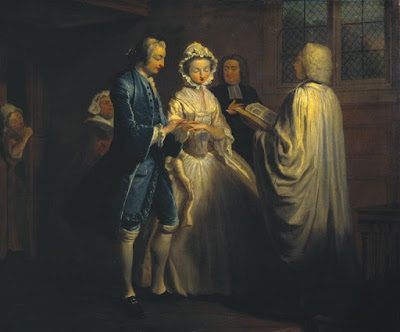 Yet another unique New England wedding custom was the “smock marriage”. Colonial legal scholars often argued that if a widow only wore a shift at her wedding, then her new husband would escape liability for any debts owed by her or by her deceased husband.

In 1724, the Town of Westerly, Rhode Island recorded several smock weddings. In 1789, Moses Joy married the widow Hannah Ward in Newfane, Vermont. According to one witness, the bride stood inside a closet naked and extended her hand to her husband through a hole in the door. An early 19th-century account from Westminster, Vermont, noted that the “widow Lovejoy married Asa Averill” while nude and standing in a chimney recess behind a curtain. In York, Maine the widow Mary Bradley met the bridegroom on the highway, “halfway from her home in February while only clad only in a shift”. When the minister arrived, he quickly threw his coat over the shivering bride and performed the ceremony.

We’ll keep our eyes open for any other period accounts of unusual wedding practices. If we come across any additional information, we’ll be sure to post it here.

In the meantime, be sure to support our friends at Untapped History and vote for them as the 2019 Best Tourist Attraction on the Northshore!
Posted by Alexander R. Cain at 10:04 PM 34 comments: