When the nerds aren’t salivating over all things Lexington and Concord, we’re usually exploring the history of 18th and early 19th Century Newburyport. The seaside community has a unique and special history that includes shipbuilding, rum, privateers, Benedict Arnold and the very eccentric Lord Timothy Dexter.

Recently, we decided that we wanted to share eight cool artifacts from the 18th century that have direct or indirect ties to Newburyport. While a couple of these items bore witness to the American Revolution, the remainder are local in nature and provide a snapshot of life in the seaport town.

Without further delay, here are eight very cool, but little known, artifacts from the Newburyport area!

Wedding Dress (Museum of Fine Arts, Boston, MA). This wedding dress was worn by Newbury’s Mary Beck in her marriage to Nathaniel Carter on September 1, 1742. The dress is made of silk and has various floral patterns in green, blue, yellow, pink and violet colors.

The Becks were a prominent merchant family from the Waterside District of Newbury and in the early 1760s advocated for the district to form a separate town. Ultimately the movement was successful and Newburyport was created. On January 28, 1764, the General Court of Massachusetts permitted the separation and passed "An act for erecting part of the town of Newbury into a new town by the name of Newburyport." According to the resolution “Whereas the town of Newbury is very large, and the inhabitants of that part of it who dwell by the water-side there, as it is commonly called, are mostly merchants, traders, and artificers, and the inhabitants of the other parts of the town are chiefly husbandmen; by means whereof many difficulties and disputes have arisen in managing their public affairs – Be it enacted ... That that part of the said town of Newbury ... be and hereby are constituted and made a separate and distinct town.” 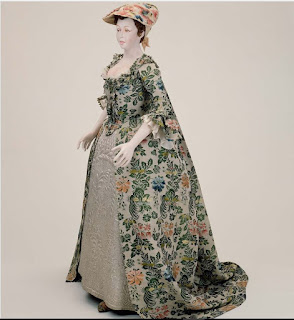 Nichols and Coffin Fire Buckets (Custom House Maritime Museum, Newburyport, MA and Private Collection). A fire bucket was typically made of leather and used to fight fires. Pursuant to Massachusetts colonial and state laws well into the 19th Century, every home was required to have one fire bucket per occupant. If there was a fire, all town residents were required to turn out with their buckets and form human chains between a water source and the fire. Residents would then toss water from the buckets onto the fire until it was extinguished. Afterward, it was common for residents to simply toss the buckets into a large pile. Fire buckets, like modern lobster trap buoys, were often decorated with unique colors, patterns, and designs so that could owners identify and claim their buckets.

These particular fire buckets belonged to a pair of prominent Newburyport families and date to the 1770s. 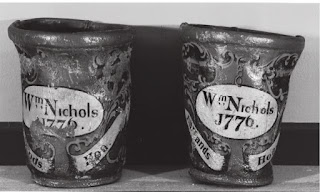 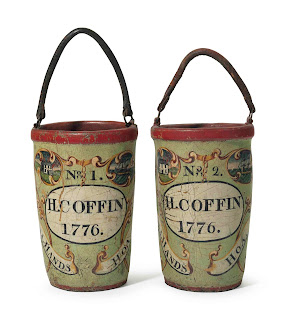 Portrait of a Man in a Blue Jacket (Private Collection). "Portrait of a Man in a Blue Jacket, a Member of the Perkins Family, Newburyport, Massachusetts" by Benjamin Blyth (1746–1787). Benjamin Blyth was born in Salem, Massachusetts, in 1746 and was one of the best known and most successful portraitists on the Massachusetts North Shore from the mid-1760s through the early 1780s. He found a ready clientele amongst wealthy shipowners and merchants and his depiction of Captain John Somes and his wife Anna, currently at the Cape Ann Museum, is typical of his work.

This particular item depicts a member of the Perkins Family from Newburyport. It was auctioned by Skinner, Inc. on November 3, 2018 and sold for $1046.00. 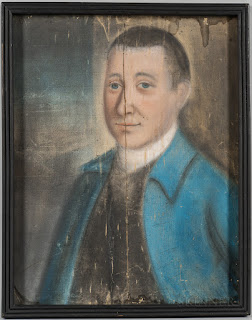 Painting of the Thorn (Private Collection). The HMS Thorn was built in Mistley, England and launched on February 17, 1779. She weighed over 305 tons, had eighteen guns, was coppered along the hull bottom and pierced for eighteen guns. Unfortunately, service in the Royal Navy was short lived as the ship and crew were captured by two American naval frigates on August 25,1779. She was towed back to Boston and sold as a prize to Isiah Doane. The vessel was quickly outfitted and re-launched as the Privateer Thorn on November 11, 1779. On April 5, 1780, Newburyport’s Nathaniel Tracey purchased the Thorn. While serving as a Newburyport privateer, the Thorn was very successful in disrupting British supply lines. Unfortunately, she was re-captured in August of 1782. The Thorn remained in the service of the Royal Navy until 1816. Afterward, the ship was sold to the Marine Society of London to serve as a training vessel.

In 1797, British artist George Owen created a series of watercolors, including one of the Thorn, for a naval publication. Although this image was drawn a little over a decade after the American Revolution, it is the only known drawing of a Newburyport privateer from the American Revolution. This image, as well as three companion drawings, were sold at auction on January 26, 2017, to a private collector. 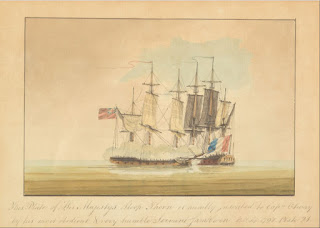 John and Dorothy Hancock’s Chariot (The Dorothy Quincy Homestead, Quincy, MA). On January 21, 1778, John Tracy and others presented to John Hancock an elegant chariot that was taken from a British vessel captured by the Newburyport based privateer “Civil Usage” the previous year. According to a newspaper account found by Boston 1775’s John Bell, the March 11th Pennsylvania Ledger, noted that “John Hancock of Boston appears in public with all the pageantry and state of an Oriental prince. He rides in an elegant chariot, which was taken in a prize to the “Civil Usage,” a pirate vessel, and by the owners presented to him. He is attended by four servants, dressed in superb livery, mounted on fine horses richly caparisoned, and escorted by fifty horsemen with drawn sabres, the one half of whom precede, and the other follow, his carriage.”

In the 19th Century, the owners of the chariot removed the vehicle's wheels and installed runners, thereby making it a horse-drawn sleigh. It is currently in the possession of the Dorothy Quincy Homestead in Quincy, Massachusetts. 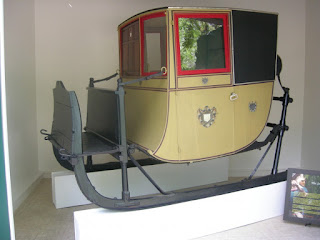 Gout Stool (Museum of Old Newbury, Newburyport, MA). Gout is a form of inflammatory arthritis caused by the crystallization of uric acid in joints. The joint at the base of the big toe is most commonly affected, and the pain caused can be excruciating and recurrent. A gout stool elevates the afflicted foot to provide some relief. In the 18th century, diet and a sedentary lifestyle were seen as the chief causes of the disease. Though these factors are important, today we know that others, like family history and chronic illnesses, can also be to blame. Ben Franklin suffered from gout, and in 1780 penned a comic essay of an imagined conversation between himself and “Madam Gout.”

This particular stool is hinged, allowing it to be adjusted to the most effective position. It dates to the mid-18th Century and is in the possession of the Museum of Old Newbury. 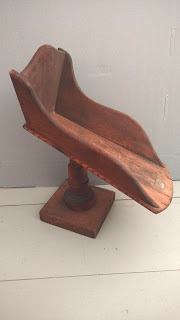 Joseph Little Hatter’s Sign (Private Collection). Joseph Little was born in 1730, married Elizabeth Hazen and worked as a hatter in Newburyport until his death in 1792. He also served as a private in the Continental Army during the American Revolution. Joseph Little’s older brother was Col. Moses Little (1724-1798) a captain of the local company of Minutemen that marched in response to the Lexington-Concord Alarm of April 19, 1775.

This trade sign caused quite a stir in 2017 when it was listed for sale on eBay for a mere $25000. The rare wooden trade sign displays a cocked hat, the date 1762, Little’s name and his occupation of “hatter”.

The sign was in the custody of the Rhode Island School of Design and the Daphne Farago Collection of Americana and Folk Art until it was sold at auction by Sotheby’s in 1991. It was owned by a private collector in Philadelphia until 2017 when he sold it on eBay. Its current location is unknown. 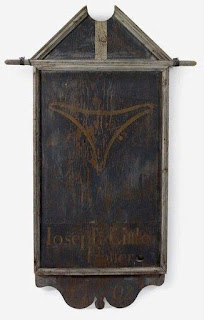 Communion Jug (Old York Museum, York, ME). This communion jug is attributed to Daniel Bayley of Newburyport and is dated to c. 1763. According to the Old York Museum, “this jug—one of the earliest dated pieces of American redware—was used to store wine for communion services at the Fifth Parish Congregational Church of Newbury, headed by Reverend Oliver Noble. It is the only documented example of eighteenth-century ecclesiastical redware produced in New England.” On one side it is inscribed with the name “Daniel Bayley”. On the other it is marked “For the use of Mr. Noble’s CHURCH July 10, 1763.” 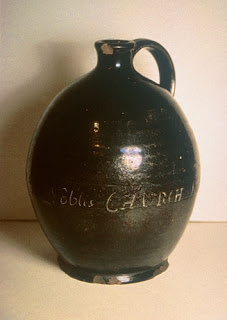 Know of any other cool 18th and early 19th Century artifacts from Newburyport we should be highlighting? Be sure to let us know!

In the meantime, be sure to support our friends at Untapped History and vote for them as the 2019 Best Tourist Attraction on the Massachusetts Northshore!
Posted by Alexander R. Cain at 12:45 AM No comments: