It is no secret that the Nerds are fascinated with the research studies and reports from the past few years that explore the Civilian Evacuation of April 19, 1775. That said, we have become increasingly interested in a “subcategory” of the evacuation that focuses on the day’s events from the perspective of child witnesses.
Admittedly, the Nerds are unaware of any existing primary accounts from children that document the occurrences of that day’s events. Instead, most, if not all of the accounts from children first surfaced in the early to mid 19th Century and are understandably subject to careful scrutiny.

Many historians rightfully argue that these 19th-century accounts may be tainted by either fading memories or a desire to exaggerate or sensationalize one’s role during the early months of the American Revolution. As 19th Century Massachusetts historian George E. Ellis noted, many veterans and witnesses who claimed to have participated in the Battle of Bunker Hill, "Their contents were most extraordinary; many of the testimonies extravagant, boastful, inconsistent, and utterly untrue; mixtures of old men's broken memories and fond imaginings with the love of the marvellous. Some of those who gave in affidavits about the battle could not have been in it, nor even in its neighborhood. They had got so used to telling the story for the wonderment of village listeners as grandfathers' tales, and as petted representatives of 'the spirit of '76,' that they did not distinguish between what they had seen and done, and what they had read, heard, or dreamed. The decision of the committee was that much of the contents of the volumes was wholly worthless for history, and some of it discreditable, as misleading and false."

With that context in mind, the Nerds would still like to highlight a pair of accounts from Lexington’s Elizabeth Clarke and Anna Munroe regarding their memories of April 19, 1775. 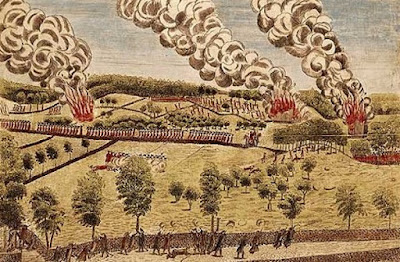 The first is from Elizabeth Clarke. Elizabeth was the daughter of Lexington’s spiritual leader, the Reverend Jonas Clarke. At the time of the Battle of Lexington, Elizabeth was twelve years old. On April 20, 1835, Elizabeth wrote to her niece, Lucy Ware Allen. In her letter, she describes her family’s role in the Civilian Evacuation as well as the aftermath of the Battle of Lexington. Specifically, Clarke initially notes how in the early morning of April 19th, her family hid “money, watches, and anything down in the potatoes” before evacuating to safety.

Following the Battle of Lexington, Elizabeth asserts that the family returned to the town common. “Father sent Jonas down to Grandfather Cook's to see who was killed and what their condition was and, in the afternoon, Father, Mother with me and the baby went to the Meeting House. There was the eight men that was killed, seven of them my Father's parishioners, one from Woburn, all in Boxes made of four large boards nailed up and, after Pa had prayed, they were put into two horse carts and took into the graveyard where some of the neighbors had made a large trench, as near the woods as possible and there we followed the bodies of those first slain, Father, Mother, I and the baby, there I stood and there I saw them let down into the ground, it was a little rainy but we waited to see them covered up with clods and then for fear the British should find them, my Father thought some of the men had best cut some pine or oak bows and spread them on their place of burial so that it looked like a heap of brush.”

A second account is attributable to Anna Munroe. Anna was the daughter of Lexington tavern owner William Munroe and his wife Anna. At the time of the Battle of Lexington, Anna was just shy of four years of age. According to her 19th-century account, the family initially evacuated their tavern along the Bay Road in the early hours of April 19th and “hid on a hill behind the establishment”.

In the aftermath of the Battle of Lexington, the family returned to Munroe Tavern but was forced to flee yet again in the wake of Lord Percy’s relief column arriving in Lexington. According to her account, young Anna “could remember seeing the men in red coats coming toward the house and how frightened her mother was when they ran from the house. That was all she could remember.”

Interestingly, Anna supplements her account by stating “her mother told her of her very unhappy afternoon. She held Anna by the hand, brother William by her side and baby Sally in her arms . . . She could hear the cannon firing over her head on the hill. She could smell the smoke of the three buildings which the British burned between here and the center of Lexington. And she did not know what was happening to her husband, who was fighting, or what was happening within her house. . . Anna’s mother used to talk to her of what happened on April 19th and she remembered that her mother used to take her on her lap and say: ‘This is my little girl that I was so afraid the Red coats would get.’”

Although a significant amount of time had passed between the actual events of April 19th and the recording of their statements, the accounts of Anna and Elizabeth still underscore the devastating psychological and physical impact the Battles of Lexington and Concord had on the civilian population.

Of course, the Nerds are always on the hunt for primary accounts of the events of April 19, 1775, from the perspective of children. If you are aware of any, feel free to let us know!
Posted by Alexander R. Cain at 10:39 PM No comments: