A few months ago, the Nerds gave a presentation on the muskets available to Massachusetts militia and minutemen on the eve of the American Revolution.

Admittedly, the presentation was merely an overview of available weapons and did not cover all possible muskets that were likely used at the Battles of Lexington and Concord.

Similarly, the Nerds recognize that each weapon discussed during our presentation could be the subject of its own unique presentation.

Nevertheless, we wanted to share with our followers the presentation so as to shed light on the weapons utilized by provincial troops at the outbreak of the American Revolution.

The presentation can be accessed here.

Please feel free to share or use the document as you see fit!

On October 29, 1775, the Massachusetts Provincial Congress addressed what appropriate military exercise the various militia and minute companies should adopt in preparation for war with England.

It is possible that the delegates considered the “Norfolk Exercise”.  Developed in England in 1757, the Norfolk Exercise, or “A Plan of Discipline, Composed for the Use of the Militia of the County of Norfolk”, had been adopted by many New England militia companies by 1768 and was declared the official drill of the colony in the early 1770’s.

However, the Massachusetts Provincial Congress ordered that “it be recommended to the inhabitants of this Province that in order to their perfecting themselves in the Military Art, they proceed in the method ordered by his Majesty in the year 1764, it being, in the opinion of this Congress, best calculated for appearance and defence.”  Known as the 1764 Crown Manual of Arms, this was the drill used by the British troops stationed in Boston in 1775. 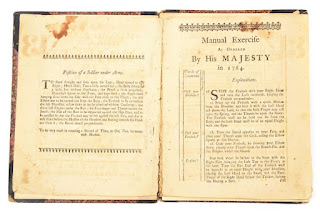 According to research conducted by Dr. Niels Hobbs, in late 1774 and early 1775, several Boston, Salem and Newburyport print shops acquired copies of the Crown Manual and offered it to sale to the general public. Understandably, many Massachusetts militia officers and NCOs quickly purchased copies to assist them in preparation for the coming war.

For your review, here is a scanned copy of the 1774 “Boston Edition” of the 1764 Crown Manual that was sold by print shops in Eastern Massachusetts on the eve of the American Revolution. Interestingly, the second page of the edition includes the October 29, 1774 resolution from the Massachusetts Provincial Congress ordering the adoption of the Crown Manual by Massachusetts militia and minute companies.

Please feel free to share this document with others!