On the eve of the American Revolution, the Massachusetts Provincial Congress and its Committee of Safety were scrambling to arm its minute man and militia companies with bayonets. By April 14, 17775, only 10,108 bayonets existed for 21,549 muskets. So how did Massachusetts authorities address this shortage?

Some modern historians, as well as many reenactors, believe minute and militiamen simply armed themselves with hatchets, tomahawks or axes. Unfortunately, existing evidence does not support such a proposition. Instead, it appears that hatchets were seen either as camp tools or as a last choice substitution for bayonets. As a result, the extensive carrying of hatchets by reenactors at living history events may be an over-representation of their intended and actual use on April 19, 1775.

First, a review of Massachusetts militia laws from the 18th Century (1700 - 1775) reveals a single reference to the use of hatchets. Specifically, in 1757, Massachusetts Bay Colony revised its militia laws and started to place an emphasis on men acquiring bayonets. The law does indicate that swords were an acceptable substitute and hatchets were to be treated as a last choice. Specifically, “that any Soldier born on the training Lists in the several Regiments, shall be excluded from any Penalty for not being furnished with Swords, in Case they provide themselves and appear with good Hatchets.”

A review of the resolutions of the Massachusetts Provincial Congress and the Committee of Safety between October 1774 and April 1775 suggests there was no recommendation for hatchets, tomahawks or axes to be treated as combat weapons. Typically, Congress’ recommendations for arms and equipment of minute companies stated “that each of the minute men, not already provided therewith, should be immediately equipped with an effective firearm, bayonet, pouch, knapsack, thirty rounds of cartridges and balls.”  Any reference to hatchets or tomahawks is noticeably absent.

Likewise, a search of the 1774 and 1775 minutes of both the Massachusetts Provincial Congress and the Committee of Safety for various terms synonymous with "hatchets" yielded negative results. For example, a search of the term “tomahawk” produced no results. The term “hatchet” yielded three references, however each was part of correspondence to Native American Tribes. The term “axe” revealed several results, but the item always appeared in conjunction with the terms “shovels”, “spades” and “pick-axes”; which suggests Massachusetts authorities viewed the item as a camp tool rather than a combat weapon.

On the local level, a review of several dozen Massachusetts town orders and resolutions regarding the arms and equipment of its militia and minute companies produced not a single instance of tomahawks or hatchets being ordered as a substitute for bayonets. Similarly, most towns hired local carpenters to modify gun stocks, blacksmiths to make bayonets and edged weapons and saddlers to make cartridge boxes and belting. Surprisingly, there is no known evidence of local tradesmen receiving compensation for the production of hatchets for local minute or militia companies. Finally, a review of the available 1775 returns of arms and equipment for provincial forces does not make any reference to tomahawks or hatchets. For example, A Return of the [Chelmsford] Company of the 7th Regiment of Militia in the County of Middlesex lists canteens, blankets, ramrods, priming wires and brushes and cartridge boxes, but makes no note of hatchets or tomahawks. 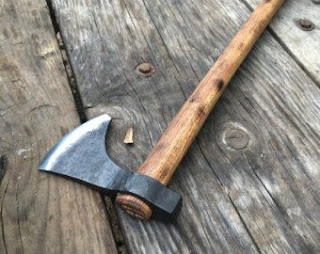 Naturally, some historians have pointed towards the “scalping” incident of a British soldier at the Battle of Concord as evidence that militiamen were armed with hatchets. Unfortunately, there is no evidence that a hatchet or tomahawk was actually used in the incident. In fact, one period descriptions implies the soldier may have been beaten with a blunt instrument and then mutilated with a knife or sword, not a hatchet. As General Gage noted, several of his soldiers in Concord “observed three Soldiers on the Ground one of them scalped, his Head much mangled, and his Ears cut off, tho’ not quite dead; a Sight which struck the Soldiers with horror.”

Right out of the gate we should note we do have a concern with this document because no one has seen the original. For the past two decades, only a transcription of this privately owned record exists.

Nevertheless, assuming that the information is accurate, of the 678 men enlisted in this regiment, 255 were carrying swords or hatchets. Unfortunately, what the breakdown is between the two items is unknown. That said, what is of note is that an almost an equal amount (248 men) carried no edged weapons while an additional 175 carried bayonets.   Thus, in a best case scenario, approximately thirty-six percent of the men in this regiment carried hatchets. However, a more likely scenario is approximately twenty percent of the regiment, or two in every ten men, may have carried a hatchet.

So where did the idea that minute and militiamen used hatchets extensively as a substitute for bayonets come from? Most likely it came from Galvin’s The Minute Men. In that work, the author does suggest that “many” militiamen utilized hatchets as an edged weapon of choice.   Naturally, many historians and reenactors simply ran with the concept and the idea spread.

Obviously, this issue needs to be examined more closely. That said, living historians who portray militiamen who fought at the Battles of Lexington and Concord may want to rethink whether or not a hatchet is an appropriate addition to their respective kits.
Posted by Alexander R. Cain at 8:34 PM