"Receiv’d 30 bullets … 3 flints and a hatchet" - The Use of Hatchets by Militia and Minute Companies on April 19, 1775 Revisited

A few years ago, the Nerds published a blog post arguing that hatches and tomahawks were rarely used by Massachusetts militia and minute men in 1774-1775.

In support of our position, we relied upon our research findings of the time.

First, a review of Massachusetts militia laws from the 18th Century (1700 - 1775) reveals a single reference to the use of hatchets. Specifically, in 1757, Massachusetts Bay Colony revised its militia laws and started to place an emphasis on men acquiring bayonets. The law does indicate that swords were an acceptable substitute and hatchets were to be treated as a last choice. Specifically, “that any Soldier born on the training Lists in the several Regiments, shall be excluded from any Penalty for not being furnished with Swords, in Case they provide themselves and appear with good Hatchets.”

An examination of the resolutions of the Massachusetts Provincial Congress and the Committee of Safety between October 1774 and April 1775 suggests there was no recommendation for hatchets, tomahawks or axes to be treated as combat weapons. Typically, Congress’ recommendations for arms and equipment of minute companies stated “that each of the minute men, not already provided therewith, should be immediately equipped with an effective firearm, bayonet, pouch, knapsack, thirty rounds of cartridges and balls.” Any reference to hatchets or tomahawks was noticeably absent.

Likewise, a search of the 1774 and 1775 minutes of both the Massachusetts Provincial Congress and the Committee of Safety for various terms synonymous with "hatchets" yielded negative results. For example, a search of the term “tomahawk” produced no results. The term “hatchet” yielded three references, however each was part of correspondence to Native American Tribes. The term “axe” revealed several results, but the item always appeared in conjunction with the terms “shovels”, “spades” and “pick-axes”; which suggests Massachusetts authorities viewed the item as a camp tool rather than a combat weapon. 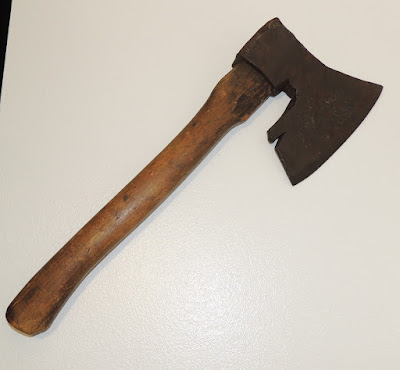 On the local level, a review of several dozen Massachusetts town orders and resolutions regarding the arms and equipment of its militia and minute companies produced not a single instance of tomahawks or hatchets being ordered as a substitute for bayonets. Similarly, most towns hired local carpenters to modify gun stocks, blacksmiths to make bayonets and edged weapons and saddlers to make cartridge boxes and belting. Surprisingly, there is no known evidence of local tradesmen receiving compensation for the production of hatchets for local minute or militia companies.

Finally, a review of the available 1775 returns of arms and equipment for provincial forces does not make any reference to tomahawks or hatchets. For example, A Return of the [Chelmsford] Company of the 7th Regiment of Militia in the County of Middlesex lists canteens, blankets, ramrods, priming wires and brushes and cartridge boxes, but makes no note of hatchets or tomahawks.

With that said, the Nerds, as well as J.L. Bell of the critically acclaimed blog Boston 1775, were separately retained by the Town of Westborough to conduct a peer review of a report examining the community’s militia and minute service record for April 19, 1775. During the review process, the Nerds stumbled across a curious finding held in the Westborough Public Library - evidence of hatchets being issued to Captain Edmund Brigham’s Minute Company on April 19, 1775.

Specifically, the Town of Westborough has a pair of “real time” documents that describe provisions and equipment issued to their minute men literally just before they marched off to war. One of the documents identifies hatchets being issued in addition to other equipment to Westborough men. For example, “Asa Ware Receiv’d 30 bullets … 3 flints and a hatchet.” John Piper was issued “a pound of powder, and 4 flints and 30 bullets … a hatchet.” Job Pratt received “half a pound of powder, a hatchet and 8 bullets.”

It should be noted that not all of Brigham’s men received hatchets. Many simply were issued flints, bullets and quantities of powder, thereby creating the inference that the men may have been already been armed with bayonets, swords or cutlasses. 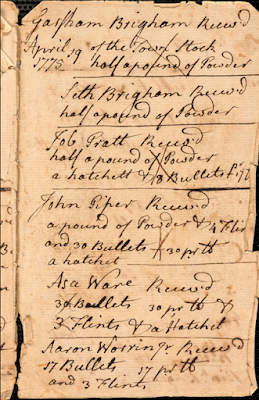 Is there any possible explanation why Westborough was issuing hatchets?

There is no doubt Westborough, like many other Massachusetts communities, was on a wartime footing by April, 1775. However, like Amesbury, Westborough was somewhat tight with the purse when it came to funding and supplying its military troops.. As late as March 1775, a town committee was still scrambling to acquire sufficient gunpowder and ammunition for its minute and militia companies. After some difficulty, it also obtained the approval of town residents to purchase “twelve fier arms and bayonets and other articles … [and] two good drums for the minut company on the Town cost … and to provide and do everything that is necessary and convenient to make the said cannon fit for use and our defence.”

On the eve of Lexington and Concord, it appears that the town was logistically "behind the eight ball" in regard to the issuance of proper sidearms to its men. As a result, Westborough turned to hatchets.

So with all that said, the Nerds are modifying our previous position that hatchets were rarely utilized by Massachusetts troops at the Battles of Lexington and Concord. Instead, we are now asserting that although hatchets were carried by militia and minute men, they were seen as sidearms of last resort.

Of course, we will continue to research this issue and if we discover any additional information, we will gladly share it with you! In the meantime, feel free to gather the pitchforks, light the torches, warm up the tar and assemble the feathers in response to our correction.

To save the angry mobs travel time, just look for us wherever tasty pastries with frosting are sold!