The Nerds are thrilled to have Historians Joel Bohy and Dr. Douglas D. Scott join us today as guest bloggers!

Mr. Bohy is considered one of the leading experts on the events of April 19, 1775. He is an appraiser of arms and militaria on PBS’s popular Antiques Roadshow. He’s also an active member of the American Society of Arms Collectors and an instructor for Advanced Metal Detecting for the Archaeologist.

Dr. Scott has been the Great Plains Team Leader for National Park Service’s Midwest Archaeological Center in Lincoln, Nebraska since 1983. He has written five books and more than 100 monographs and articles on those and related subjects. He is particularly noted for his expertise in battlefield archeology and firearms identification.
Without further introduction, take it away gentlemen!
Many of us have read the histories of April 19, 1775. The British expedition marching all night to Lexington, arriving early in the morning. Muskets fired, men killed and wounded. Obviously, we feel pain and heartbreak for the dead and their families, but what about the men listed as wounded? The British then march off towards Concord and the events of the day continued. But back to Lexington. What became of those ten men who were wounded? Were they badly hurt? Did they recover? Sadly, for most of them we just do not know as their stories have been lost to history, but for one we do.
One of the members of Captain John Parker’s Lexington militia company wounded that morning was John Robbins. His name not only appears in the newspapers of the period and history books, but he was one of the men who wrote a deposition on April 24, 1775 for the Provincial Congress attesting to what happened on Lexington Green:
“I John Robins being of lawfull age, do Testify & say that on the nineteenth Inst. the Company under the Command of Capn. John Parker, being drawn up, (sometime before sun Rise) on the Green or Common, And, I being in the front Rank, there suddenly appear’d a Number of the Kings Troops, About a Thousand as I thought, at the distance of about 60, or 70 yards from us Hazzar[d]ing and on a quick pace toward us, with three officers in their front, on Horse Back and on full Gallop towards us, the foremost of which cryed, throw down your Arms ye Villains, ye Rebels, upon which said Company Disperseding. - The foremost of the three Officers orderd their Men, saying fire, by God fire, at which Moment we Received a very heavy & close fire from them, at which Instant, being wounded I fell, Several of our men were shot Dead by one, Capn. Parkers men, I believe had not then fired a Gun and further the Deponant saith not -John Robins” 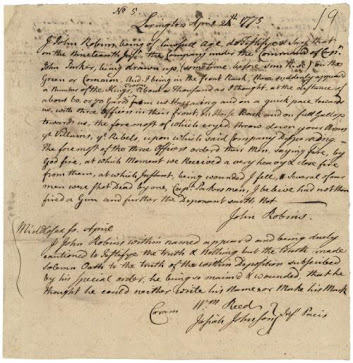 One of the interesting things is his name is misspelled as “Robins,” missing one of the n’s not only at the start of his deposition but also in the signature. Is this a clue to his wounds?

After April 19 and the Battle of Bunker Hill a few of the wounded men began to ask the state for help. Their wounds, in some cases, made them unable to work and make a living. Medical bills were also growing and with no income how could they pay the bills and provide for their families? Many of these petitions for a pension, or after December 1775 for lost and broken material, are in the collection of the Massachusetts State Archives spread through numerous volumes. The earliest petition for Robbins is from 1776. It gives a description of his wounds:

“To the Honorable the Colony Counsil & the Honorable the House of Representatives in general Court assembled The Petition of John Robbins of Lexington Humbly Sheweth, That your Petitioner was on the memorable 19th of april 1775 most grievously wounded. by the Brittish Troops in Lexington, by a musket ball which passed by the left of the spine between his Shoulders through the length of his neck making its way through and most miserably Shattering his under jaw bone, by which unhappy Wound your Petitioner is so much hurted in the Muscles of his shoulder, that his Right arms is rendered almost  useless to him in his Business and by the fracture of his under jaw the power of Mastecation is totally  destroyed and by his, low Slop diet, weakness, and  total loss of his right arm, and the running  of his wound, his Situation is rendered truly Pitiable being unable to Contribute any thing to the Support of a wife and five small Children but is rather a Burden upon them, & has no Encouragement from his Surgeon of his being Materialy better He therefor is under the disagrable  Necessity of begging relief & assistance of this Honrrable Court by a Pension or other wise as your Honors Great wisdom & compations may suggest, and your Petitioner as in duty bound will Ever pray Lexington 14th June 1776 John Robbins” 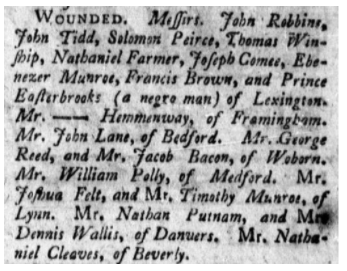 Not only does the petition describe his ghastly wound, but he had a wife and five small children all under the age of 13 to support. For the 1776 petition, Robbins is given a pension for the year:

Resolved that there be allowed and paid out of the Publick Trsy to and for the use of the Petitioner John Robbins the sum of thirteen Pounds six Shillings and Eight pence yearly untill the General  Court Shall otherwise Order it, to Recompence him for his sufferings by wounds which he recd on the 19th of Aprill 1775”

He submits petitions with the same wording till 1778 when he has another addition to his family, a daughter named Hannah. This time his petition also included a note from his doctor. It seems his body was never going to recover from his awful bullet wound from the morning of the 19th:

“To The honorable Council of the State of Massachusetts  Bay. This Certificate humbly sheweth that the Bearer Mr John Robbins of Lexington receiv,d such a grevious Wound thro: the Muscles of his right shoulder Neck & Jaw Bone which last was miserably fractured: by which Wound the unhappy Man is yet so debilitated in his right shoulder that He is unable to perform but very little labor as Fatigue upon his small Farm for the support of a numerous  Family of young Children and in the Opinion of the Subscriber who was his surgeon He is unhappily like to remain in such a weakned hopeless Condition during life and is a proper Object of the gracious Bounty of this State----------- Watertown July 5th .1778 sign,d Marshall Spring, N.B. He was wounded in the Morning of the 19th of april 1775 at Lexington." 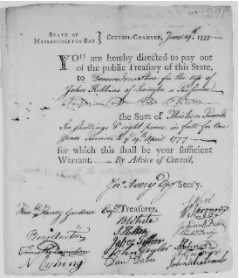 Robbins continues to petition yearly for a pension through the war and does receive money from the state. The last listing found for him is in a newspaper article with a list of pensioners stating that a July 8, 1786 resolve of the courts placed him on a list of pensioners that the commonwealth felt could do garrison duty. He was to appear at the Commissary of Pensions for a revue. After this date there does not seem to be any other info on John Robbins. But what about his wound?
John Robbin’s pension documents graphically describe the horrific wounds he suffered to his back, neck and jaw on Lexington Green, April 19, 1775. Could a single musket ball have done such extensive damage to cause him partial nerve damage in his arm and broken his jaw to the point of only being able to eat “low slop?” Or might his pension application exaggerated the effect of his wounds to obtain a larger compensation from a sympathetic audience? 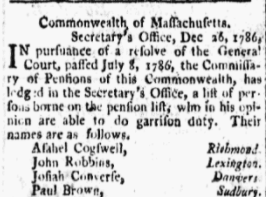 Military surgeons in the late 18th and well into the 19th century described and commented on treating gunshot wounds in a variety of texts and treatises. A perusal of some of these texts as well as the pertinent sections of the Medical and Surgical History of the War of the Rebellion (Part One, Volume 2 and Part 2, Volume 2, 1875 and 1877 respectively) for wound effects of .69-caliber musket balls clearly demonstrate that these large lead balls could indeed inflict significant and lasting effects to hard and soft tissue as well as nerves. Once a ball enters the human body it can be deflected from a straight path through the tissue by any number of factors and exit the body after a torturous route. This is borne out by our recent live fire studies of Colonial era weapons, particularly with the shooting of British land pattern muskets. We observed, using high speed video recording, that a .69-caliber ball shot at target 25 to 30 yards away that the ball’s velocity and energy were significant enough to pass through reproduction clothing and 32 inches of tissue simulant. That is the equivalent of the body mass of two people. The ball, on exiting the tissue simulant, still had enough velocity and energy to travel between 50 and 100 additional yards before reaching its terminal velocity.

John Robbins’ pension application account of his wounding provides additional clues as to why he suffered such extensive wounds.  Robbins states he was in the front rank of the Parker’s militiamen drawn up on Lexington Green. His account states the company started to disperse when the British regulars were ordered to fire.  Assuming the accuracy of his account he may well have turned so that his back was partially toward the British line. On hearing the firing begin he may have instinctively ducked or bent forward so that the British ball struck his upper left back near the spinal column. If slightly bent over, as is speculated, the ball could well have been deflected by muscle and possibly striking a transverse process on one of the vertebrae. Such deflection is consistent with the ball passing around or under the spinal column and traveling up the neck, shattering his mandible, and exiting the body.  Robbins’ right arm paralysis is consistent with bullet caused nerve damage, as is the damage to his jaw that no longer allowed him to chew his food. His note that the wound was still “running” suggests that his wound had not fully healed and he suffered from a residual infection. Perhaps some cloth bits or other foreign matter were still in the wound causing it to continue to fester and discharge up to at least 1776. He is lucky to have survived his wounds at all given the state of medical knowledge and treatment of the day.