"A musket cut as under &c.” - Did Lieutenant William Tidd Really Exclaim "You Won't Get My Gun!" at the Battle of Lexington?

Shortly after the 2022 reenactment of the Battle of Lexington, members of the Lexington Minute Men and His Majesty’s 10th Regiment of Foot contacted the Nerds regarding the historical accuracy of the phrase “You won’t get my gun!”.

For those who may be unfamiliar with the reenactment, this statement is shouted out by a participant portraying Lieutenant William Tidd in response to a British officer’s demand to “lay down your arms!”

But what is the origin of the defiant statement “You won’t get my gun”?

As a preliminary matter, we have to remember that the annual Battle of Lexington reenactment is a slow-motion historical pageant. Although the script is based upon 18th and early 19th-century documentation, there is an element of drama and flair associated with the event.

In reality, the actual Battle of Lexington was a quick and very bloody mess. The Nerds estimate that the engagement lasted, at most, between two and five minutes. Based upon available documentation, it appears British light infantry companies from the 4th and 10th Regiments of Foot surged forward and deployed into a battle line almost instantaneously. Meanwhile, British officers on horseback barked orders at Captain John Parker’s Company to disperse and get out of the way of the His Majesty’s forces. Suddenly, a single shot rang out… and the rest is history.

So, was the phrase “You won’t get my gun!” shouted during the battle?

The comment was allegedly made by Lieutenant William Tidd, who was second in command of the Lexington militia on April 19, 1775.

Curiously, Lieutenant Tidd provided two sworn statements regarding his role at the Battle of Lexington. Neither makes any reference to a defiant declaration to British authority.

The first statement was submitted on April 25, 1775, as part of a sworn group affidavit. According to Tidd, “that on the 19th of April instant, about one or two o'Clock in the morning, being Informed that several officers of the Regulars had, the evening before, been riding up and down the Road, and had detained and Insulted the Inhabitants passing the same; and also understanding that a body of Regulars were marching from Boston towards Concord, with intent (as it was supposed) to take the Stores, belonging to the Colony, in that town, we were alarmed, and having met at the place of our Company's Parade, were dismissed by our Captain, John Parker, for the Present, with orders to be ready to attend at the beat of the drum. We further testify and declare, that about five o'Clock in the morning, hearing our drum beat, we proceeded towards the Parade, and soon found that a Large body of troops were marching towards us: Some of our Company were coming up to the Parade, and others had reached it; at which time the Company began to disperse: Whilst our backs were Turned on the Troops, we were fired on by them, and a number of our men were Instantly killed and wounded. Not a Gun was fired, by any Person in our Company, on the Regulars, to our knowledge, before they fired on us, and they continued Firing until we had all made our Escape.”

Years later, in 1824, Tidd submitted a second sworn statement. Again, he does not refer to shouting, “You won’t get my gun!”. According to his 1824 deposition, “I, William Tidd, of Lexington, in the county of Middlesex, do testify and declare, that I was a Lieutenant in the company of Lexington militia, commanded by Capt. John Parker, in the year 1775; that, previous to the 19th of April of that year, it was expected the British would soon commence hostilities upon the then Provincials; that said company frequently met for exercise, the better to be prepared for defense; that, on the evening previous to the 19th a number of the militia met at my house for the above purpose; that, about two o'clock on the morning of the 19th, I was notified that, the evening previous, several of the British officers had been discovered riding up and down the road leading to Concord; that they had detained and insulted the passing inhabitants; and that a body of the regulars were then on the march from Boston towards Lexington; -- I then immediately repaired to the parade ground of said company, where, after its assemblage and roll call, we were dismissed by Capt. Parker, with orders to assemble at the beat of the drum; -- that, at about five o’clock of said morning, intelligence was received that the British were within a short distance; and, on the beat to arms, I immediately repaired to where our company were fast assembling; that when about sixty or seventy of them had taken post, the British had arrived within sight, and were advancing on a quick march towards us, when I distinctly heard one of their officers say, “Lay down your arms and disperse, ye rebels!” They then fired upon us. I then retreated up the north road, and was pursued about thirty rods by an officer on horseback (supposed to be Maj. Pitcairn.) calling out to me, “Damn you, stop, or you are a dead man!” – I found I could not escape him, unless I left the road. Therefore I sprang over a pair of bars, made a stand and discharged my gun at him; upon which he immediately turned to the main body, which shortly after took up their march for Concord. William Tidd.” 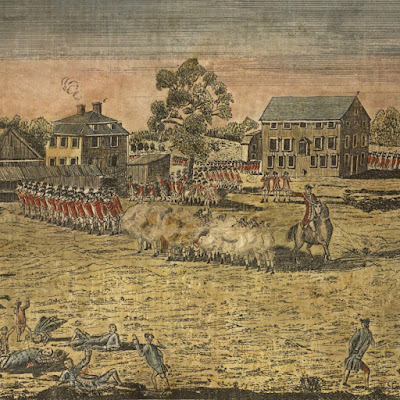 So, where does this phrase come from?

On the Lexington Minute Men website, a research article drafted by Carmin F. Calabrese concedes that Tidd most likely did not utter the statement. According to historian and author Dr. Samuel Forman, the origin of the defiant declaration can be traced back to the script of the 150th-anniversary reenactment of the Battle of Lexington (1925). The script, which can be found at the Lexington Public Library, does contain the phrase “You won’t get my gun!” Dr. Forman also noted that the 1925 script served as the foundation for the 1975 Bicentennial reenactment script, which is still in use today.

Ironically, regardless of whether or not Lieutenant Tidd uttered the phrase, it should be noted that His Majesty’s forces did not truly seize his firelock that day. A 1775 petition to the Massachusetts legislature for financial restitution from damages suffered at the Battle of Lexington, asserts that Tidd's “losses by the Kings troops on the 19th of April 1775 … [included] ... a musket cut as under &c.”

Tidd noted in his 19th-century deposition that he was chased off the field by a mounted officer. It is possible but unconfirmed that Tidd’s gun was damaged after deflecting a slash by a saber or sword. On the other hand, the gun could have been damaged later in the day. Obviously, further research needs to be conducted to determine the fate of his weapon.

The Nerds, as well as the very talented and informative Dr. Samuel Forman, will be at History Camp Boston 2022 next weekend. Be sure to stop by Suffolk University and say hi!

Alexander R. Cain
Massachusetts, United States
Alexander Cain graduated from Merrimack College in 1993 with a degree in economics and New England School of Law with a juris doctrate. He frequently lectures on historical issues and developments in the United States. Alex has published several research articles relevant to New England militias and loyalists during the American Revolution. He has published two books - "We Stood Our Ground: Lexington in the First Year of the American Revolution (2nd Edition)" and "I See Nothing but the Horrors of a Civil War". He is also a frequent contributor to PBS, Concord Magazine and the Journal of the American Revolution. Alex resides in Massachusetts with his wife, Paula, and his children John and Abigail. https://www.historicalnerdery.com