"Many Leaped Over the Wall and Made for That Wood" - Manuevers of Massachusetts Forces on April 19, 1775

This past April, the Nerds participated in Minute Man National Historical Park’s Battle Road activities. During some downtime, we chatted with one of the Park’s interpretive rangers about the operational maneuvers of Massachusetts militia and minute companies as they attempted to engage His Majesty’s forces during the Battles of Lexington and Concord.

That discussion got the Nerds thinking. With the help of two of the Park’s rangers (Cool Rangers Jim and Jarrad), we collected several accounts describing the maneuvers of Massachusetts militia and minute men on April 19, 1775. Generally, we placed the movements into two categories: units not within striking distance that shifted course to intercept the retreating column and units that adjusted their march route to gain a tactical advantage over the enemy immediately before engagement.

Regarding units attempting to intercept the retreating column, these companies typically hailed from Essex and Norfolk Counties, as well as the southern and western regions of Middlesex County. These units were alarmed later in the morning or early afternoon and initially took a path towards Concord. However, as they advanced, alarm riders and others shared conflicting reports of the location of His Majesty’s forces as they retired back towards Boston. For some units, including militiamen from Salem, the constant information caused significant confusion…resulting in repeated changes in course and unnecessary halting to determine the best route to follow. As Timothy Pickering noted, “The confusions of yesterday, testified by every officer I could talk with, fully justify these assertions. In general, I am told, every man did that which was right in his own eyes.”

Upon entering Bedford, the minute companies of Andover constantly had to shift direction in a desperate yet failed effort to intercept the retreating column. According to Lieutenant Benjamin Farnum,“April 19, 1775. This day, the Mittel men of Colonel Frye's regiment were Alarmed with the Nuse of the Troops marching from Boston to Concord, at which Nuse they marched very quick from Andover, and marched within about 5 miles of Concord, then meeting with the Nuse of their retreat for Boston again with which Nuse we turned our corse in order to catch them. We retreated that Day to Notme [Menotomy] but we could not come up with them. The nit coming on, we stopped; the next day we marched to Cambridge.”

Andover minute man Thomas Boynton expressed frustration as his unit shifted course twice to reach the regulars. “Andover, April 19, 1775. This morning, being Wednesday, about the sun's rising the town was alarmed with the news that the Regulars was on their march to Concord. Upon which the town mustered and about 10 o'clock marched onward for Concord. In Tewksbury news came that the Regulars had fired on our men in Lexington, and had killed 8. In Bilricke news came that the enemy were killing and slaying our men in Concord. Bedford we had the news that the enemy had killed 2 of our men and had retreated back; we shifted our course and persued after them as fast as possible, but all in vain; the enemy had the start 3 or 4 miles.”

Militia and minute companies from Newbury, Rowley and Ipswich were alarmed late in the day thanks to Newburyport treating initial reports of the Battle of Lexington as a false rumor. It wasn’t until the Town of Danvers sent a message back to the seaport community confirming the morning events that alarm riders were dispatched towards Cape Ann. Throughout the afternoon, men from the three towns zigzagged down the coastline in an effort to get ahead of the column before it reached the safety of Boston. By the time the exhausted units reached Lynn, they were forced to halt and encamp for the night.

The Reverend Samuel West, pastor of the First Parish of Needham, Massachusetts accompanied the town’s militia company to war after it had mustered at his home. As West and his men advanced north towards East Lexington and Menotomy, they continuously shifted their intercept course based upon the smoke wafting above the regulars and the thunder of artillery. As the minister recalled “The news reached us about nine o’clock A.M. The east company in Needham met at my house as part of the Military stores were deposited with me, they there supplied themselves, and by ten o’clock all marched for the place of action with as much spirit and resolution as the most zealous friends of the cause could have wished for. We could easily trace the march of troops from the smoke which arose over them, and could hear from my house the report of the cannon and the Platoons fired by the British.”

Of course, the shifting of direction was not limited to efforts of catching up and intercepting the regulars. Many units that were within striking distance of Lieutenant Colonel Smith’s forces adjusted their routes so as to gain a tactical advantage over their enemy. 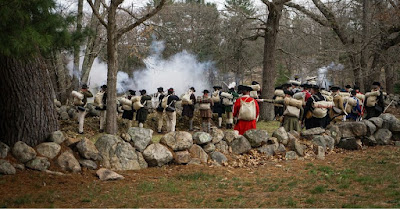 When the Town of Sudbury was alarmed, multiple minute and militia companies mobilized independent of each other. In fact, most of the Sudbury units followed different routes to reach Concord. At least two, perhaps three, of the Sudbury companies changed direction to avoid Smith’s advance forces who were searching the Barrett House and pressed on to augment the provincial forces gathering above the North Bridge. They were rerouted again by a local Concord guide and directed to advance on the town’s South Bridge.

Captain Joseph Smith’s Company from East Sudbury bypassed the North Bridge and took a longer route through Lincoln to attack the regulars near Brook’s Hill. A second Sudbury company, under the command of Captain Nathaniel Cudworth followed suit.

After stumbling upon the aftermath of the Battle of Lexington,the men of Woburn took a wide path through Lincoln to avoid detection by His Majesty’s forces. Specifically, Loammi Baldwin led his men off of the Bay Road and marched them towards Lincoln’s meeting house. Afterward, he turned towards Concord and advanced towards Brook’s Hill. As he later noted. “We proceeded to Concord by way of Lincoln meet­ing-house, . . . ascended the hill, and pitched and refreshed ourselves a little. . . . The people under my command and also some others came running off the East end of the hill while I was at a house, and we proceeded down the road, and could see behind us the Regulars following.”

The rangers at Minute Man National Historical Park, as well as the Nerds, agree that Baldwin may have considered moving towards Meriam’s Corner but upon seeing the column, pulled back off the east end of Brooks Hill and set up an ambuscade at Elm Brook Hill.

Reading appears to have undertaken a very sudden and radical change of course in order to attack the retreating regulars at Elm Brooks Hill. According to the Reverend Edmund Foster, he joined the men of Reading as they advanced towards Concord. After engaging the “flank guard , of about 80 or 100 men” at Meriam’s Corner, the men of Reading pulled back, swung wide and sought an opportunity to reengage. That opportunity presented itself at Elm Brooks Hill.

According to the minister, “We saw a wood at a distance, which appeared to be in or near the road the enemy must pass. Many leaped over the wall and made for that wood. We arrived in time to meet the enemy. There was then, on the opposite side of the road, a young growth of wood well filled with Americans. The enemy was completely between two fires, renewed and briskly kept up. They ordered out a flank guard on the left to dislodge the Americans from their posts behind large trees but they only became a better mark to be shot at. A short but sharp contest ensued, at which the enemy received more deadly injury, than at any one place from Concord to Charlestown. Eight or more of their number were killed on the spot, and no doubt, many wounded.” 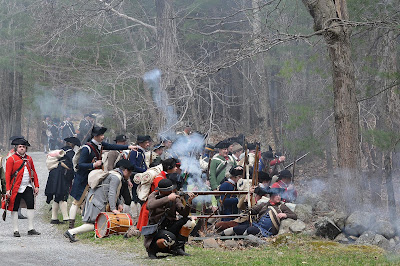 John Parker’s Lexington Company likely executed a tactical maneuver after his company withdrew from Parker’s Revenge. After discharging a single volley, the Lexington militiamen quickly retired up an access path to the top of the hill and then moved down the east side. Once at the bottom, the company cut across a series of fields, and moved to a new position further down the road to attack the column again.

So in short, there is ample evidence that Massachusetts provincial forces were not individually chasing His Majesty’s forces  and taking “pop shots” when the opportunity presented itself. Instead, many militia commanders made intentional tactical decisions as to how best intercept or engage the enemy so as to either block their retreat or cause significant damage.

Of course, the Nerds will continue to research this topic and will update you when we uncover additional accounts!!

Alexander R. Cain
Massachusetts, United States
Alexander Cain graduated from Merrimack College in 1993 with a degree in economics and New England School of Law with a juris doctrate. He frequently lectures on historical issues and developments in the United States. Alex has published several research articles relevant to New England militias and loyalists during the American Revolution. He has published two books - "We Stood Our Ground: Lexington in the First Year of the American Revolution (2nd Edition)" and "I See Nothing but the Horrors of a Civil War". He is also a frequent contributor to PBS, Concord Magazine and the Journal of the American Revolution. Alex resides in Massachusetts with his wife, Paula, and his children John and Abigail. https://www.historicalnerdery.com